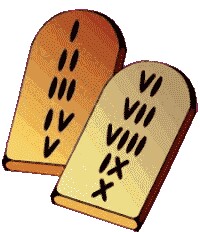 Christians say that the Ten Commandments found in chapter 20 of Exodus are the basis of our morals and laws today.  If one takes a close look at each of the commandments, many of which Christians fail to abide by, it's easy to see that most of them wouldn't even make the top 100 list of good morals or laws that everyone should obey.


The first four commandments have nothing to do with morals, ethics or anything of that nature.  Those commandments have more to do with a jealous god; an egotistical god.  Since commandments 1 through 4 don't really lay a foundation for good, moral standards, we'll throw those out.  Now we have the Six Commandments.
Commandment 1 of the Six Commandments sounds like a good philosophy to live by, given that your parents created you, raised you, provided for you...It sounds logical that parents should be honored.  But what if one's parents were abusive?  What if a parent mentally and physically tortured their child, should the child honor that parent?  I agree that children should have respect for their parents, provided the parents earn the respect of their children.  Merely giving birth to a child does not automatically earn the parent respect; the parent must also have respect for the child.  We'll throw this commandment out, because it's outdated.  So now we have the Five Commandments.
Commandment 1 of the Five Commandments is one that is pretty much on every law book on the planet.  I'll concede that this commandment means to murder a person, not just to kill a person.  There are certain circumstances in which one might have to kill another person, but there are no circumstances in which a person should or must murder another person.  This is one law that civilized societies observe, and one which an individual can be arrested for and punished by imprisonment or death.  It's a keeper.  And for the record, abortion is not murder.
Commandment 2 of the Five Commandments...Given the different definitions in the Bible for this law, there isn't an individual on the planet who hasn't broken this commandment.  Jesus said that to just look upon someone with lust is adultery.  This commandment has to be taken out because it's impossible not to break by anyone with raging hormones, which we all experience at least once in our lives.  Besides, you can't be arrested for it even if you committed the physical act; well not in the United States anyway.  Now we only have the Four Commandments.
We are still on commandment 2 with this new set of rules.  I happen to agree with this one as well.  I know there may be certain situations in which a person may have to steal; survival for example.  But to take someone else's property for financial or personal gain is unethical in my book.  This is another commandment in which an individual can be arrested for, and be imprisoned.  In some cultures, the punishment is more severe.
Commandment 3 is acceptable just for moral reasons.  However, I wouldn't place it in a list of 20 commandments, but I wouldn't completely toss it out either.  You can't be arrested for it, but you can be sued by someone because of it.  Some Christians see this commandment as "Thou shalt not lie", which is not the case.  Lying can be ambiguous, and there are situations in which one may have to lie.  I wouldn't have "Thou shalt not lie" on any list of commandments.  Commandment 3 of the Four Commandments is very specific on who the lie is about.
Commandment 4, I just don't get.  It's just human nature to desire something that someone else has.  As long as you don't gain possession of it by stealing it, I see no reason this was ever included in the Ten Commandments.  Nothing more to say about this one but to say out it goes.  This leaves us with the Three Commandments.
Three commandments; that's it.  These are the foundation of all of our laws and morals?  Only two of these commandments calls for the arrest and punishment of someone if broken by them; unless you want to get technical and include perjury.  I think anyone today could come up with a better set of commandments.  Here are my ten commandments, in no particular order, if I were going to lay down the law.  Of course, someone else may have a different or even better list.
© 1999 Derrick Miller

Back to "Problems with the Bible"